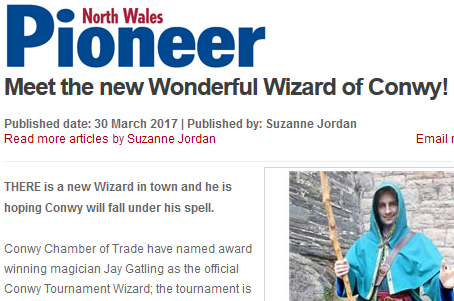 Jay was in the news recently, when he was revealed as the official Conwy Tournament Wizard.

THERE is a new Wizard in town and he is hoping Conwy will fall under his spell.

Conwy Chamber of Trade have named award winning magician Jay Gatling as the official Conwy Tournament Wizard; the tournament is coming to the town in June. The historical re-enactment event will feature a “throng” of knights, nobles, Vikings, musicians, actors, jugglers, merchants and jesters.

Jay, a Llandudno based magician, received news of his prestigious title this week and swiftly tweeted images of his new wizarding robes.

He said: “I couldn’t believe it. The news came completely out of the blue.

The Conwy Wizard will be appearing at the Tournament this summer. As well as the Wizard, the event will feature over 300 re-enactors, jousting knights, travelling fools, minstrels and Erwyd le Fol the Conwy Jester 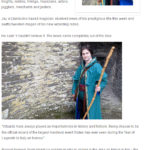 You can see the full article by clicking on the image to the left, or click here to read it on the North Wales Pioneer website.

Update:
A variation on the above article appeared in the printed version of the North Wales Pioneer, as shown in the image below. 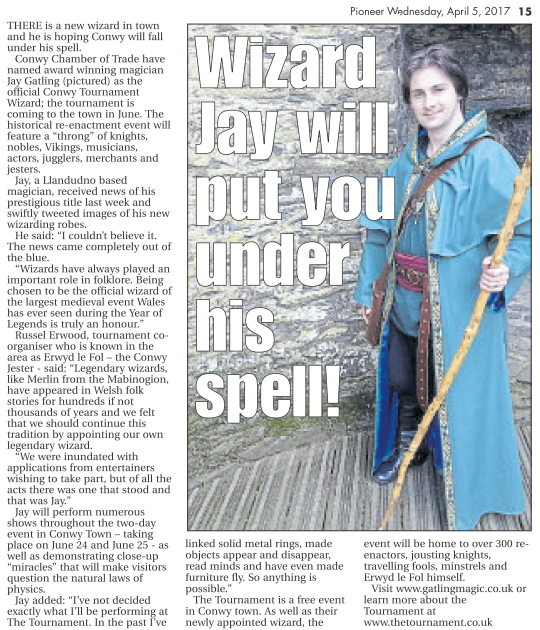 At a recent private party near Caernarfon, Two The Hilt performed an epic sabre duel silhouetted against the setting sun. The evening ended in style with a fire show by Erwyd.

We decided to take advantage of the good weather recently, and went up to the Great Orme in Llandudno to do some filming of Two The Hilt in action.

This short video shows swashbuckling sword-fighting in a fantasy setting from Gatling and Erwyd.

Check out our Facebook page to see more: www.facebook.com/twothehilt

This website uses cookies to improve your experience while you navigate through the website. Out of these, the cookies that are categorized as necessary are stored on your browser as they are essential for the working of basic functionalities of the website. We also use third-party cookies that help us analyze and understand how you use this website. These cookies will be stored in your browser only with your consent. You also have the option to opt-out of these cookies. But opting out of some of these cookies may affect your browsing experience.
Necessary Always Enabled
Necessary cookies are absolutely essential for the website to function properly. This category only includes cookies that ensures basic functionalities and security features of the website. These cookies do not store any personal information.
Functional
Functional cookies help to perform certain functionalities like sharing the content of the website on social media platforms, collect feedbacks, and other third-party features.
Performance
Performance cookies are used to understand and analyze the key performance indexes of the website which helps in delivering a better user experience for the visitors.
Analytics
Analytical cookies are used to understand how visitors interact with the website. These cookies help provide information on metrics the number of visitors, bounce rate, traffic source, etc.
Advertisement
Advertisement cookies are used to provide visitors with relevant ads and marketing campaigns. These cookies track visitors across websites and collect information to provide customized ads.
Others
Other uncategorized cookies are those that are being analyzed and have not been classified into a category as yet.
SAVE & ACCEPT
Powered by